As I see in the new year, it occurs to me that, like many people, I have never woken up on 1st January without a hangover. I don’t consider myself a heavy drinker; I only drink socially, not every night and never alone. Well, apart from after that break up in 2015…

I consider myself quite unconventional in many ways, but when I get to the bar, I become a gender cliché. My boyfriend has a pint of Guinness, but I prefer Prosecco, or lady crack, as he calls it. Well, you can take the girl out of Essex…

Of course, I’m not alone. The sales of Prosecco have been rapidly increasing every year, reaching €789m across Europe in 2016. After the Italians, Brits are the biggest consumers of it in the world. I recently tried a Bellini, Prosecco mixed with peach nectar, in Harry’s Bar in Venice where it was invented. Ernest Hemmingway used to drink there in the late ‘40s. You can imagine him knocking back a few then snoozing on the gondola ride home.

My introduction to alcohol was rather less glamorous. I can’t remember my very first sip, but it was probably from one of those fluorescent bottles of Mad Dog 20/20 they sold in the local newsagents. Available in bright green, orange and blue, and best enjoyed in the park with the boys from school! 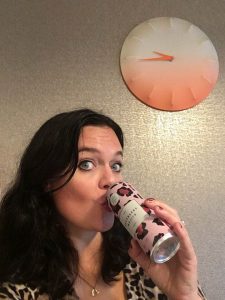 I tried drinking because everyone did it, but I didn’t really like it. Even from an early age, made me ill. I remember going on a day trip with my mum when I was about twelve. I’d been to a party the night before, but denied drinking any alcohol. I even ate some plums for breakfast to prove that I was fine. The game was up when we pulled up in Windsor and I threw up in the front of the coach.

The term alcohol comes from the Arab ‘al kuhl’. ‘Al’ is the Arabic definite article and ‘kuhl” means ‘kohl’, which as any Goth will know, is that black stuff you smear around your eyes, a technique popular with Arab women centuries ago. Kohl powder was obtained by the process of sublimation – heating the solid to vapours then cooling it again, so it was considered to be the essence or “spirit” of the mineral.

The term alcohol found its way into English in the 16th century, when it was used for any substance that was obtained in pure form by this process. Its alchemical name was ‘aqua vitae’ or water of life. Ironic, as there are almost 8000 alcohol-specific deaths in the UK every year. The human love affair with booze stretches back into antiquity. At 11,600 years old, Göbekli Tepe may be the world’s oldest known temple site. Inside, are six barrel or trough-shaped stone vessels, some of which could hold 40 gallons of liquid, which archaeologists think were used to brew a basic beer from wild grasses. The Sumerians worshipped Ninkasi, the goddess of beer, 5,000 years ago. The ancient Egyptians ran industrial-scale breweries to supply the builders of the Great Pyramids and Pharoahs were buried with miniature breweries for the afterlife. The ultimate lock in!

Rice wine has been consumed in China for at least 9000 years. Wine from grapes was made 7,400 years ago in the mountains of modern-day Georgia and Iran. The Babylonians worshiped a wine goddess as early as 2700 BC. In ancient Greece, they loved a symposium, originally an all-male, after dinner booze fest. Greek hosts served watered down wine in three bowls; the first for health, the second for pleasure, and the third for sleep.

“When this bowl is drunk up, wise guests go home,” the poet Eubulus observed in C4 BC. “The fourth bowl is ours no-longer but belongs to violence; the fifth to uproar; the sixth to drunken revel; the seventh to black eyes. The eighth is the policeman’s; the ninth belongs to biliousness; and the 10th to madness and the hurling of furniture.” I’ve been to some parties like that!

Wine was also the favourite tipple in ancient Rome, from where it spread throughout the empire. Apparently, warriors drank heavily before fighting and went into battle smashed. It’s not surprising they needed a bit of Roman courage to face the Celts. Then their enemies got hooked too; the Celts in France went through the equivalent of 28,000 bottles a year of Italian red.

It seems our lust for booze is limitless. With no fruit or grain accessible, the Central Asian nomads even fermented horse milk. I bet that that milkshake brings all the boys to the yurt!

The traces at sites such as Göbekli Tepe suggest that drinking at least partially had spiritual purposes, imbibed to connect with other realties and not just blur this one. When the Inca drank chichi or corn beer, they often stirred in psychoactive herbs. The chichi-fuelled feasts lasted days and the Incas offered their magic beer to the gods on mighty altars.

This reminds me of a time in Guatemala. I was taken to a village temple to see the statue of a local saint and had to feed him tequila to entice him to hear my prayers. Why wouldn’t the deities like drinking as much as their human devotees. Where can a god get a drink around here?

However, there are also longstanding negative associations between alcohol and the occult. Some used to believe that when people got drunk, they became possessed by malicious, devouring spirits. My friend, who works as a psychic, claims that when she worked in a pub, she could see the spirits of negative entities hanging down from the ceiling. She said they were waiting for people to become so pissed they weren’t in control of themselves and they could jump on in.

Somehow the demon booze does seem to have some strange hold over us. It’s a relationship which often turns abusive. It’s not always easy for people to strike the balance between having the pleasure and inspiration from spirits, without going too far.

Coming back late on an empty train last week, I picked up a magazine on the seat next to me. As I flicked through, it became clear that this whole publication was dedicated to giving up alcohol. With each page I turned, I felt a little more nervous. I don’t think of myself as much of a boozer, but would I be able to quit drinking? Could I really face life, parties, even New Year, without its fuzzy haze at all?

Once the preserve of religious groups, the sobriety movement has gained popularity recently with Dry January and the programme One Year No Beer. The latter would be easy for me as I can’t stand the stuff. But One Year No Prosecco? I’m not so sure…

Offensive and derogatory comments will not be tolerated and anyone found to be committing these acts will be removed and their comments deleted.

You can find out more about which cookies we are using or switch them off in settings.

This website uses cookies so that we can provide you with the best user experience possible. Cookie information is stored in your browser and performs functions such as recognising you when you return to our website and helping our team to understand which sections of the website you find most interesting and useful.

Strictly Necessary Cookie should be enabled at all times so that we can save your preferences for cookie settings.

If you disable this cookie, we will not be able to save your preferences. This means that every time you visit this website you will need to enable or disable cookies again.

This website uses Google Analytics to collect anonymous information such as the number of visitors to the site, and the most popular pages.

Please enable Strictly Necessary Cookies first so that we can save your preferences!